Learn about my initial thoughts on the city of Amsterdam, capital of The Netherlands. 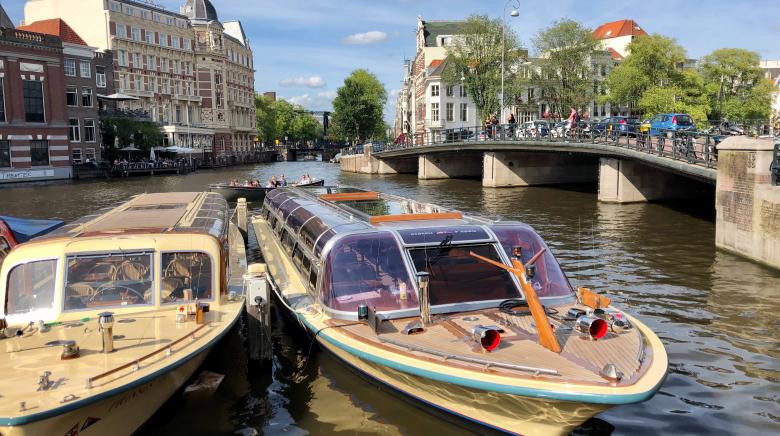 There's nothing quite like the experience of nearly getting plowed down by five bikes at once and almost falling in a canal while getting yelled at in five different languages. And of course, Amsterdam is the only place where you can encounter such an experience.

But don't worry, there's stroopwafles too, and crazy good french fries. Who knew that was a thing?

It's a stereotype for a reason. Everyone bikes.

The city is built for it and runs around the bikers. There's entire lanes and streets devoted only to bikers as well as separate stop lights. If you don't bike in Amsterdam, who even are you?

That being said, watch out for speedy bikers who don't ring their bell, because accidents happen especially with tourists. Stay out of bike lanes if you're a pedestrian and if you're a biker, stay off of the sidewalk.

Also, don't be afraid if scooters go in your lane, just let them pass you.

Again, it's a stereotype for a reason. It's as common to see people holding a joint as it is to see them hold a cigarette. The shops that sell them are called "Coffee Shops," and are easy to point out when walking down the streets. If you're not a fan, like me, be ready because the smell is absolutely everywhere and cannot be escaped.

A Warning - It is technically illegal to smoke weed in public. It's decriminalized so people do it anyways, but if you're a tourist then be careful and try to smoke only in the "Coffee Shops."

Built in the 17th century, the canals are the most recognizable symbol of Amsterdam. This extensive network is not the only form of transportation in the city, biking being another popular choice, but it is the most touristy and the most historic.

If you chose to go riding in the canals, thoroughly research the company you use beforehand and check the reviews so you don't rush and find a sup-par company like myself. Also be aware you should NOT swim in the canals as there are sewage problems.

Fun Fact! - Amsterdam has a process called "bike fishing," where every year they have to take bicycles out of the river, up to 15,000 each year.

The main language of The Netherlands is Dutch, but when in a touristy city like Amsterdam, you'll hardly need to know a word of it (although it is polite to know a few phrases). English is widely spoken, even outside of the capital. Additionally, most residents will know two or more languages, the two most prominent being German and French.

Just... wow. You hear about the district, but nothing comes close to seeing it in person. For those who don't know, prostitution in Amsterdam is legal and the Red Light District is where people come to get some (I had to say it).

Because of this, you'd think it would be a skeevy place with only men, but that's not the case at all. It's a bona-fide tourist destination, and you'll see all types of people wandering about looking at the girls in the windowsills. Kids will be on their parents shoulders, groups of schoolfriends will wander by, and old ladies will shuffle along, pointing at the spectacle not often seen in their countries.

So yes, it is legal, and you can walk in and get serviced by someone. But, there are some rules.

The rules I remember from the Museum of Prostitution are as follows:

I will write more about the district in another post, so keep on the lookout!

So clearly this can't be true of every place in Amsterdam. But it was enough to warrant a bullet point.

In restaurants, our service ranged from absent, to a bit rude, to completely forgetful and slow. Food had to be sent back, drinks were asked for and forgotten on numerous occasions, food was forgotten but still showed up on the bill, silverware was never brought, etc - you get the picture.

For tours, every trip felt rushed and half-hearted. Our guides ranged from pushy and semi-insulting to just plain inexperienced and unknowledgeable about the places they would talk about. It was as if they read from a script. Again, this is not true of all, but enough, so please RESEARCH the groups you use. Reviews are everything.

Amsterdamers like to chill, take their shirts off on hot days, and lounge. They never seem to sweat the small stuff, speeding around on their bikes in a full dress and heels as if they haven't a care in the world.

Oh, and they don't seem to sweat in general. Like you'd think that a woman in a grey body con dress riding along on a bike during a 85 degree day would have sweat stain issues, but nope, and I find that unfair.

I swear you'll find cats in the most unusual places. Most of them tagged and all seemingly well fed and happy to my eyes. You'll see them in cafes and resting outside of their houses on the canals, there's even a cat houseboat you can visit!

Visit during weekdays, not the weekend. Amsterdam is popular with everyone, native Europeans and foreign tourists. It is everyone's favorite weekend getaway, as well as the first stop on most people's European vacation. Let's just say that the crowds reflect that. Museums will stop selling entrance tickets halfway through the day, restaurants will run out of their more popular food, and the streets will be jammed. Thus, if this is your first time, do yourself a favor and avoid the weekends. You'll also avoid high accommodation expenses this way!

Tip - If you want to visit the Anne Frank house, you'll need to book MONTHS in advance. I tried to get tickets three weeks in advance and everything was sold out even for weeks after the date I looked for.

Don't buy anything people offer to you off the street, especially drugs or a bike. The drugs are often not what is advertised and the bikes are probably stolen. I've heard enough horror stories from waiters in Amsterdam to know that no tourist should even try to acquire these things.

Whereas I can say that Amsterdam is generally a clean city, it seems to have an issue with trash. Bags and bags of it, everywhere, the smell mixing with the fumes of the canals and creating an additional pungent odor. You'll usually only see this problem in the mornings before the trash gets collected, but before it does you really need to be careful about where you step.

Overall, Amsterdam is popular for a reason. It's unique, beautiful, and so much fun. You could spend hours aimlessly wandering around the canals and still want more. So grab a bike, and get going!